Tom was preceded in death by his wife of 50 years, Grace McCracken Pelle and his brother, Raymond Pelle.

Tom was born and raised in Louisville, KY where he graduated from Male High School. He worked for CSX Company and relocated to Jacksonville in 1980 and retired in 1987.

Tom was a lifetime member of the 307th Bombardment Group Veteran’s Association and was a favorite among the membership.  We was also a member of the 13th Jungle Air Force of the Army Air Corps. He served his country as a radio operator and gunner in the Pacific Theatre during World War II aboard a B-24 and was awarded the Purple Heart.

Tom was an ordained Deacon and Elder in his church in Louisville, KY and a member and past-president of the Optimist Club there. Known as a sweet and gentle man by all who met him, he was an avid musician who played, among other things, all fretted instruments, acoustic and classical guitars, banjos of all kinds, bass, mandolin ukulele and many more.  He was nominated and voted the honorary position of Music Director of the 307th Bomb Group, during the Santa Fe reunion in September, 2014.  He was a member of the First Coast Banjo Band and The Fretted Instrument Guild. He also, enjoyed being a member of the ROMEOs (Retired Old Men Eating Out).

Below is an exerpt from Tom’s interview with the Associated Press in Santa Fe, NM 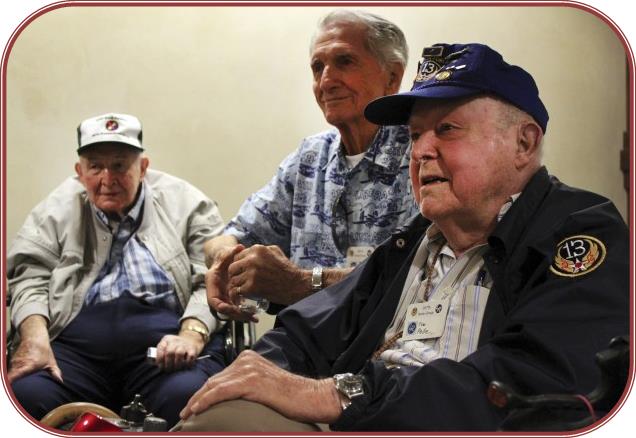 SANTA FE, N.M. (AP) — Thousands of feet above the Pacific Ocean, the bullets were coming fast and the flak was flying. Japanese fighter planes whizzed around like bees as the American forces in their lumbering B-24 bombers tried everything to reach their targets, save fuel and stay airborne for the long trip home.

That was 70 years ago, but he remembered the battle like it was yesterday.
“They hit every one of us. They shot down seven, and we were almost number eight,” said Pelle, who lost his leg in the battle. Pelle barely survived the battle on Oct. 3, 1944.

By the time it was over, his plane had 420 holes in it. He nearly bled to death after having his leg shot off. With each beat of his heart, blood from what was left of his limb squirted onto the side of the plane. Between throwing up and passing out, he could see his crewmates working to save his life, using their belts as tourniquets.

Tom agreed the story of the 307th is one of survival. They braved the challenges of navigating the Pacific along with the relentless attacks of the Japanese Zeros. Their focus: Destroying supplies and equipment being used by the Japanese, including refineries and the ships that would transport oil and fuel to enemy installments.